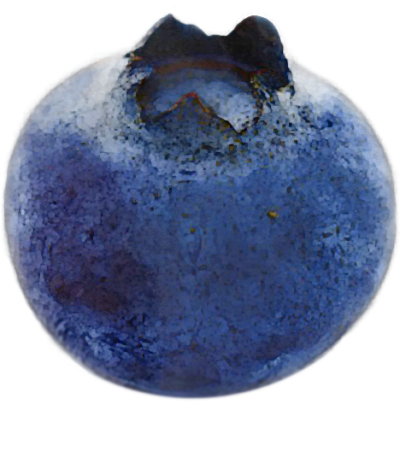 Blueberries enjoy worldwide popularity thanks to their sweetness and antioxidant-rich nutrition profile. But the bounty of nature alone is not enough to keep pace with the heavy demand for this tasty, healthy fruit. Success depends on the introduction of new cultivars to meet the changing needs of consumers as well as growers. And for more than half a century, Michigan State University has been a key player in bringing new blueberry varieties to the table.

Since the early 1900s, blueberries have been commercially grown in Michigan’s lower and upper peninsulas, and today the tiny berries are big business. In 2016, the Michigan blueberry industry spanned more than 20,300 acres and the more than 30 varieties contributed nearly $130 million to the state economy.
Breeding Abundance

In the 1960s, MSU horticulturist Stanley Johnston, perhaps best known for developing the Red Haven peach, created both the Northland and Bluehaven blueberry varieties. But few MSU plant breeders have been more successful than AgBioResearch scientist James Hancock. A professor emeritus of horticulture and recipient of the 2014 MSU Innovation Center Technology Transfer Achievement Award for excellence in applying innovation to create real-world solutions, Hancock developed three of the world’s most widely planted Northern Highbush blueberry varieties: Aurora, Draper and Liberty, along with several other successful cultivars throughout his three decades at MSU.

“Dr. Hancock’s legacy of blueberry breeding has increased access to healthy, antioxidant-rich fruit for families around the world,” says Rich Chylla, executive director of MSU Technologies. “Pairing that with the multi-million dollar impact it’s made for growers across Michigan and internationally, the strength of his research program has created a win-win for everyone involved.”

“He has set the bar for blueberry breeding,” Wheeler says. “His varieties have done very well here, and they’ve started to go all over the world and change the types of blueberries that people grow.”

They’ve spread from Michigan to the Pacific Northwest and as far away as Chile, parts of Europe and South Korea.

“Michigan has been the No. 1 state for blueberries for the last 70 years, and that success is partly due to the Hancock varieties,” says Larry Bodtke, a blueberry grower whose berries grown in Michigan and Oregon are primarily sold under the Naturipe Farms brand.

Hancock began working at MSU in 1979. He used his experience in evolutionary genetics to study blueberries and several other small fruits in an effort to identify traits beneficial for commercial production. Ideal candidates not only have superior taste, but also are adaptable to environmental stresses and pressure from diseases and insects.

Working closely with the U.S. Department of Agriculture blueberry breeder Arlen Draper, Hancock realized the need for new varieties in Michigan. In 1979, Michigan farmers were planting 30- to 60-year-old varieties such as Bluecrop, which thrives in midseason but left sizeable gaps at both the beginning and the end of the growing season.

Growers experience their highest profits in early and late harvest when supplies are lowest. Late season fruit needs to tolerate the highly fluctuating temperatures of fall. Hancock’s Aurora and Liberty varieties have a harvest that begins before older late-season varieties like Bluecrop. Both varieties also produce high and consistent yields during the late growing season and are tolerant of the harsher late-season temperatures.

Both Hancock and Draper had developed extensive germplasm resources—collections of wild and cultivated plants of all shapes, colors and sizes. Combining these separate sources enabled Hancock to identify the plants with the most desirable characteristics. Eventually he started to crossbreed those plants and trial them at the then-newly opened MSU Southwest Michigan Research and Extension Center (SWMREC) in Benton Harbor.

After 14 years of trials, Hancock emerged with results that exceeded his expectations: six varieties of MSU blueberries that together span the entire growing season.

“As a breeder, I’m most proud of the varieties,” Hancock says. “We released three in 2004, and they’ve all done extremely well, and in the last five years we’ve released three more. I feel good having the whole production season covered, and I think we’ve delivered what Michigan growers needed.”
Mastering the art of the science

The first step in the breeding process is to identify which parent plants possess the most desirable characteristics. Once that is determined, pollen is collected from one parent plant by rolling the open flower between the breeder’s fingers, causing the pollen to fall from the stamens onto a waiting microscope slide. The stigma of the other parent are then touched to the pollen-laden slide. This causes the plants to produce seeds containing a mix of both parent genetics.

The hybridized plants are grown in a greenhouse until they produce seeds. The seeds must be exposed to cool temperatures to encourage a period of dormancy in order to properly germinate so Hancock places them in a standard freezer for two months. Afterward he thaws and sprouts them. When they are large enough, they’re planted at SWMREC, where they are closely observed and evaluated for four years.

A blueberry plant must meet a long list of qualifications to be deemed exceptional by Hancock, including flavor, color, firmness and size. The plant shape is also important to meet harvest techniques, whether mechanical or handpicked. Only about 1 percent of plants make it past the first round of evaluation. Once selected, the exceptional plants are sent to growers worldwide for additional evaluation—typically four to six years—before release to the industry for production.

“All told, from the time we make the first cross between the two different plants to releasing a new variety, it can take 10 to 15 years,” Hancock says. “A plant breeder has to be very patient, but it’s very satisfying to finally reach that point. It’s a rush.”

While he’s now retired, there is little doubt that Hancock’s contributions to the blueberry industry will be felt for years to come.